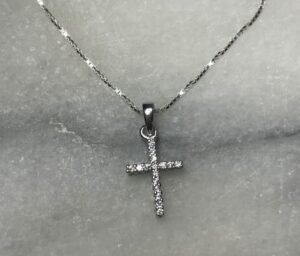 The cross has always been the representation of Christianity. Earlier Christians secretly practiced their faith and were repeatedly oppressed before Christianity became one of the world’s most powerful religions. As more and more people joined this expanding religion, openly expressing one’s faith became acceptable. As a result, wearing and exhibiting a cross pendant necklace also became common.

Wearing a cross-themed necklace is a reminder of one’s faith and helps to spread awareness. Today, it can serve as a conversation starter and serves as a symbol to others of your belief.

At Gravies Shop, you will find a variety of beautiful religious jewelry. They have inspiring hand-selected products, which you will love at first sight. Reach out to them now and check the beautiful jewelry that they offer.

Christians wear jewelry with the cross as a representation of their faith, hope, and love. It is a well-liked present appropriate for many religious occasions and holidays. The cross, the crown, and the cradle are the three primary Christian symbols.

The cross is a symbol of Jesus’ love for the people and the fact that He was the only person ever to be born with the “intention of sacrificing his life for others.” Therefore, gifting a cross pendant necklace during religious celebrations like Easter is the ideal reminder of His atonement. You can give cross jewelry as a present on other occasions and seasonal holidays. Some of them are:

A cross necklace can also be the best gift at nonreligious events like graduation. It represents the inner power we gain from our religion as we go into new stages of our lives. It serves as a reminder that everything is possible when we put our faith in God.

Although the style of cross or crucifix jewelry may differ depending on denomination, many individuals do not mind combining and mixing different designs. They all carry the same meaning and symbolism. Here are just a few examples of the various crosses:

Only used by the Pope, this cross has three horizontal bars located at the top of the vertical line. The base is the longest, and the top is the shortest.

Only bishops wear this six-inch-wide cross. It is worn in the center of the chest rather than close to the collarbone.

Cross in the Roman Catholic and Latin tradition:

The cross has a horizontal bar shorter than the perpendicular one.

It symbolizes most of the Christian denominations. The crucifix is a picture of Jesus Christ hanging on a cross.

The vertical and horizontal lines are all of the same lengths to give the cross a circular shape that resembles a brooch. It represents the Anglican Church and acts as an emblem.

One of the most well-known icons nowadays is the cross. It is a common subculture emblem that is incorporated into many subcultures. According to some, it goes well with everything. Even if the people are not religious, there is a high demand for religious jewelry.